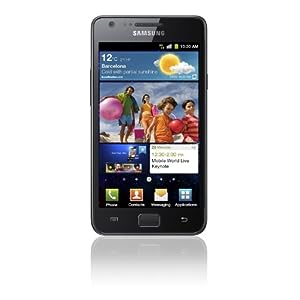 Design Galaxy S II looks more elegant when compared to SGS I. SGS II using dark-colored plastic material on the whole the phone. Plastic materials deliberately chosen and not without cause its use, is to press the weight to be a lightweight mobile phone even though the dimensions are large.

Forget the material problems of mobile phone maker, now we go on the discussion of the mobile phone screen. SGS II uses a capacitive touch screen measuring 4.3-inch AMOLED Super Plus with a depth of 16 million color resolution WVGA (480 x 800 pixels) equipped with a gorilla glass that looks very, very striking our eyes. Honestly I increase the screen to SGS SGS II looks quite signifkan although both use the type AMOLED screen, but at SGS II is now added with frills Plus because of an increase in color depth and color brightness level. In addition, Plus Super AMOLED screen batery claimed more power efficient when compared to Super AMOLED display at SGS I.

Display interface belongs to SGS II has experienced an increase in the presence of the typical look of the latest Samsung TouchWiz 4.0 (SGS I use the TouchWiz 3.0). The first change is most visible is on the lock screen, if usually shifted laterally now you can open the lock screen by sliding the screen lock screen any direction you want.