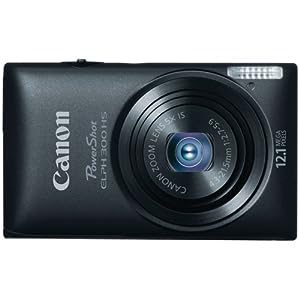 The Canon 5096B001 PowerShot ELPH 300 HS Black 12MP Digital Camera with 5x Zoom and 2.7 In. LCD Display has a slim profile that will not only make you stand out from the crowd, but it will also deliver incredibly brilliant still images and amazing 1080p HD videos. Once you turn on the camera, be prepared to be amazed at how much is packed into one of the slimmest point-and-shoot digital cameras on the market. So let your imagination run free and let the HS SYSTEM, 24mm 5x Optical Zoom and 12.1 Megapixels help you achieve great images everywhere.

I tested cameras and lenses all the time while managing the camera store so whenever I purchase a new camera or lens I always test it. The Canon 300 HS doesn’t produce the quality of images my Nikon D7000 does but I didn’t expect it to. The edges get a little soft with the 300 HS when looking at the image at 100% whereas the D7000 images are almost tact sharp.

Comparing the 300 HS to the Canon Powershot SD1000 from a few years ago, the 300 HS blows it out of the water. The SD1000 is a 7 MP camera. Shooting the same shots on a tripod with the same focal length on the lens the 300 HS uses its extra MPs well. When looking at the images from each camera at 100%, at the wide angle zoom setting and normal zoom setting both cameras have about the same relative slight softness on the edges. However the 300 HS has more MP so it actually produces much more detail in the image. I think it was smart for Canon to keep the MP at 12 because last years models while being 14 MP (SD1400) didn’t give any extra detail from what I could tell than the 12 MP version (SD1300). The SD1400 was basically just creating larger files. When zooming in the telephoto setting the 300 HS clearly produced a sharper image than the SD1000. Often cameras have sweet spots in the zoom range in which it will produce crisper images. The 300 HS has consistently good sharpness throughout it’s zoom range. 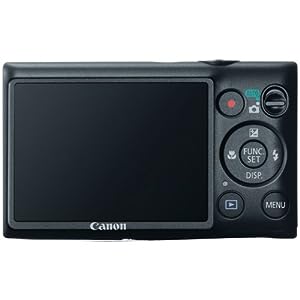 With good light, the 300 HS produces wonderful smooth 1080 videos. If you look at a lot of HD videos from compact cameras the video often looks jumpy. From what I’ve seen it wasn’t until you got to the Canon G12 or Panasonic LX5 that the video looked smooth. Both of those cameras only shoot 720p whereas this camera shoots 1080p. The video also very good detail. It truly looks HD.

If you are wanting zoom and continuous AF with your video this camera is the one you want compared to the 100 HS which doesn’t allow you to zoom. The continuous AF with face recognition is stellar with this camera in video mode. I was videoing my wife while she was driving. It focused on her face. I switched to the scenery outside. It immediately focused on that. I then went back to my wife and it found her face and focused on it right away. I even videoed her reflection in the rear view mirror and it found her face in the mirror no problem and focused on it. AMAZING!!!!

Commenting on a complaint I’ve read about the zoom being slow in video mode. If you like getting motion sickness whenever someone rapidly zooms in or out during their video this is not your camera. As smooth looking as the video is, the zoom is also. The smooth zoom creates nice looking transitions instead of warp speed ahead looks.