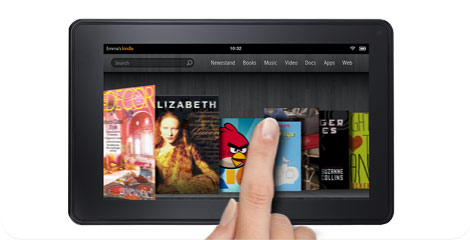 Amazon was also understood the advantages of Android and prefer to use Android in launching their first tablet called Kindle Fire. Android tablet-sized 7-inch screen is still using the Android 2.1 but was not original anymore alias already modified by Amazon. The definitive version of their Android applications already crammed full by those who are used to access Amazon services such as Amazon Prime, Amazon MP3 and Cloud Player. And there is also the Kindle bookstore featuring books and popular magazines of Conde Nast, Hearts and Meredith.

Silk also included a web browser that is able to predict the page that will load and optimize content to speed up loading time by using the Amazon EC2 cloud service.

The most interesting of  Kindle Fire is the price which is quite cheap considering the great name of the Amazon as a manufacturer of these tablets. Fire Kindle price is 199 USD, which means 300 USD cheaper than the Apple iPad.

Kindle Fire specs themselves are not cheap because it uses dual-core processor TI OMAP 1GHz 7-inch screen with 1024x600px resolution IPS with Gorilla Glass and density of 169 ppi resolution, which means higher than the Apple iPad which only 132 ppi.

Storagenya internal capacity is 8 GB a comparatively small but do not forget that Amazon provides storage services and also the movie musical cloud on cloud.

Well lack of Kindle Fire, among others, is the absence of mikofon and certainly allows the camera that is worth less expensive tablets. Then talk connection, Amazon Kindle Fire also does not support 3G network but can only access the internet via Wifi.

It’s cheap, abundant content, the Kindle Fire is probably not the iPad Fire but more of a major competitor because of its low price and content are the two advantages that can not be underestimated. Read more detail here…